This is all I know about Tanya Middleton. She was a young married woman with one child whose husband was serving with the US military in Germany. At about 10:15AM on Saturday, June 12, 1982 while a passenger on a northbound subway train in the Bronx she tried to walk from one car to the next. She never made it to the next car. A young man had followed her, and while both strangers were between cars he lifted the safety chain and pushed Tanya Middleton from the moving train. She was murdered.

I also know this: the New York Transit Police quickly classified her death as “accident.” As far as those officials were concerned Tanya Middleton was entirely responsible for her own horrific death.

Here's the link for Tanya Middleton's murder. (Scroll down.)  I was originally led to that August 21st article by the following summary on page 978 of the (printed and bound) New York Times Index for 1982:

"Update on subway death of passenger Tanya Middleton on June 12; cause has been changed from accident to homicide and suspect is being sought."


So why was the cause changed from "accident" to "homicide?" In 1982 the Transit Police Department was completely separate from the New York Police Department. It had its own detectives, but no homicide detectives. What apparently prevented Tanya Middleton’s death from permanent classification as “accident” and permits me to write that she was, in fact, murdered is that, as explained at the linked article, NYPD detectives from the local precinct in the Bronx (alerted possibly by passengers evacuated from the halted train) got involved. They found witnesses—eye witnesses who had been on the train—and in August, two months after her death, the Times could report that the “accident” label affixed by the Transit Police had been officially changed to “homicide.”

A more relevant question: "Why was it ever classified as "accident?"

Anyone who has any experience with the New York subway knows that young, fit passengers walk between cars on moving trains without fear that they might "fall off." There are safety chains in place and in order to "fall" from the train a passenger would have to unlatch that chain (like Tanya Middleton's killer) or climb over it.

But what did NYTP police officials routinely tell the media?

“Body Found on Subway Tracks.” That was the headline of a brief story The New York Times published  on September 3, 1991. (See a copy of the clipping  below.)

It was the body of a white man in his twenties who, according to Transit Police Sergeant Robert Valentino, had no ID, no possessions besides a “few coins” but “did not appear to be a homeless person.” Valentino told  the Times that “Based on their experience, the detectives at the scene think it’s an accident, that he fell from the northbound train.”

Three years later, Valentino, by then a Lieutenant, was playing the same tune with continued success: Man Dies in Subway In Fall From Train. Note that the Times described the death as an "accident."

My opinion. I think Valentino wanted the Times reporter to think that falling from a moving train was not unusual. I interpret “based on their experience” to mean he wanted Times readers to believe that Transit detectives determined (how?) that passengers who fell from moving trains did so without the involvement of anyone else. Too bad no one asked Valentino why, if falling from a train was such a common occurrence, did Tanya Middleton's murderer have to unlatch the safety chain?

An Enlightening Conversation. I developed an interest in New York City law enforcement officials' handling of unwitnessed subway track deaths when a young man I knew was killed by a train. His friends and family were convinced that, late at night at a relatively deserted subway station, he had been attacked, forced off the platform and on to the tracks where he was struck and killed. Like Sergeant Valentino’s unidentified young man he was found with no personal property, except for a few coins. And like that case, Tanya Middleton's and the 1994 incident, the Transit Police insisted he had caused his own death, that he had climbed down to  the tracks voluntarily and that no criminal activity was involved. In other words, it was an “accident.”

A few days after that “accident” a friend arranged for me to telephone an experienced New York City journalist, a man of some renown. What this veteran reporter told me in our private conversation was this: when these events occur the sole concern of Transit Police detectives was to protect the Transit Authority, the entity then responsible for managing the system, in the event of a law suit.

One need not be a lawyer to understand the concept of contributory negligence. If the deceased voluntarily left the platform and walked onto the tracks or if he or she ignored the prominently displayed warning not to walk between cars while the train is moving (a warning safely ignored by many riders) any legal claims filed by survivors would be placed in a "nuisance suit" folder by the lawyers.

In my opinion, that’s what explains the behavior of the police and their supervisors in all unwitnessed track deaths. Instead of acting as law enforcers, dedicated to the safety of the riding public, whenever an unwitnessed violent death occurs the police act as flunkies for MTA lawyers and, based on this report, those lawyers have reason to be pleased with their junior partners in the NYPD.

Although the Transit Police Department was absorbed into NYPD in 1995 I am convinced that this intense and exclusive focus on protecting the MTA was successfully transplanted into the behavior of NYPD officials responsible for the handling of such incidents. I am confident that readers will be convinced by subsequent postings that unless criminal behavior is witnessed by other passengers, homicide is automatically ruled out in all violent track deaths and no serious police investigations are undertaken.

You should understand that this is not a  matter of a handful of crimes falling between the cracks. I am convinced that since Tanya Middleton’s murder the cumulative number of these unwitnessed violent deaths, most of which, in my opinion, were actually homicides, now total several hundred.

I could not find the 1991 “Body Is Found on Subway Tracks” article in the Times’s archives but here's an image of my clipping from the paper which can be enlarged by clicking. 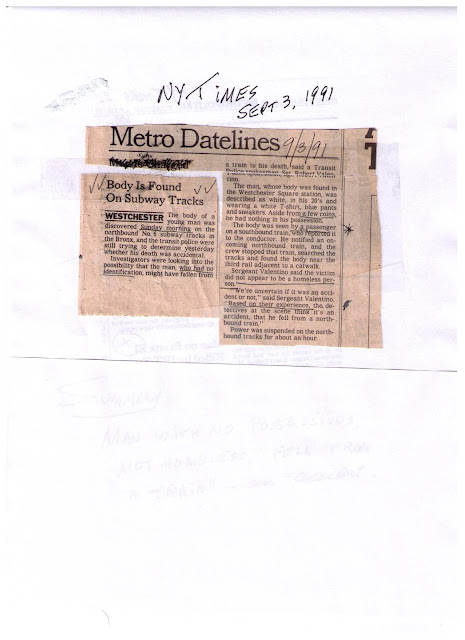 I recently came across a clipping from The Times of April 17, 1990 describing another "accidental" death of a person who was &quo...